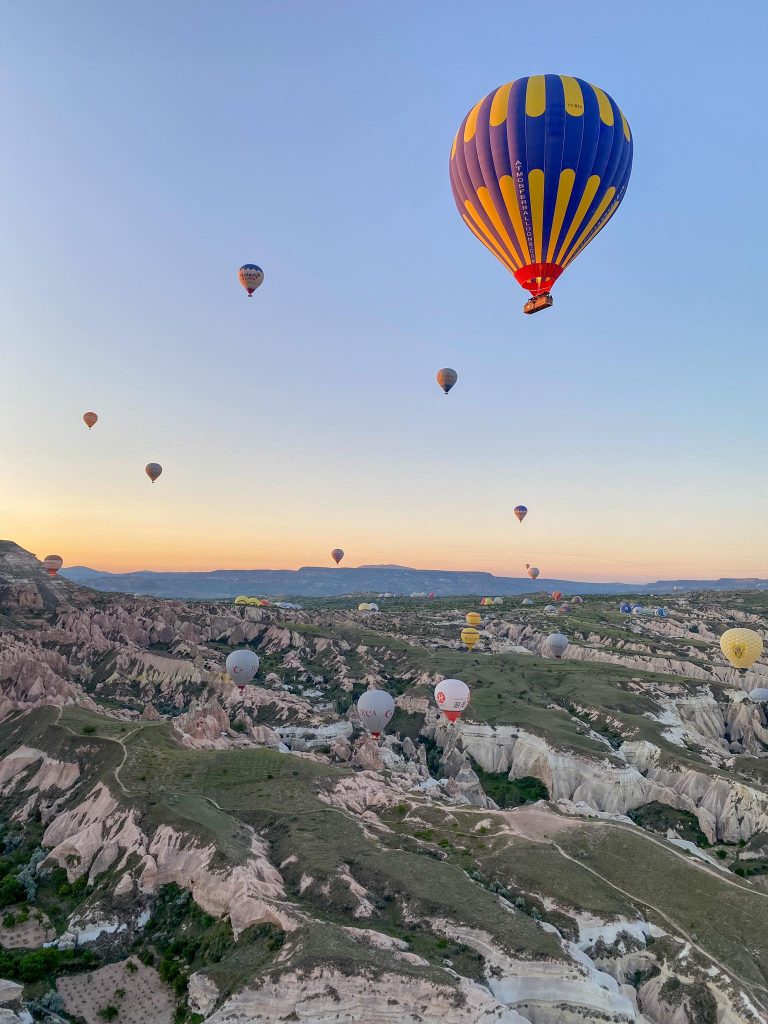 Cappadocia had been on my travel wish-list for a few years, and this May it was finally crossed off. Cappadocia the land of beautiful horses, peculiar rock formations, fairy chimneys and the hundreds of hot air balloons that fly out each morning during sunrise. Even though it has been heavily popularized by social media in recent years, I still think it’s a place worth the visit.

In this blog post I will share with you my 4 day itinerary for Cappadocia as well as some tips and usefull information while there. I was there for 5 days including the travel days. Ideally for Cappadocia 3 or 4 days is enough, to see everything.

Best time to visit Cappadocia is April through June and September and October. 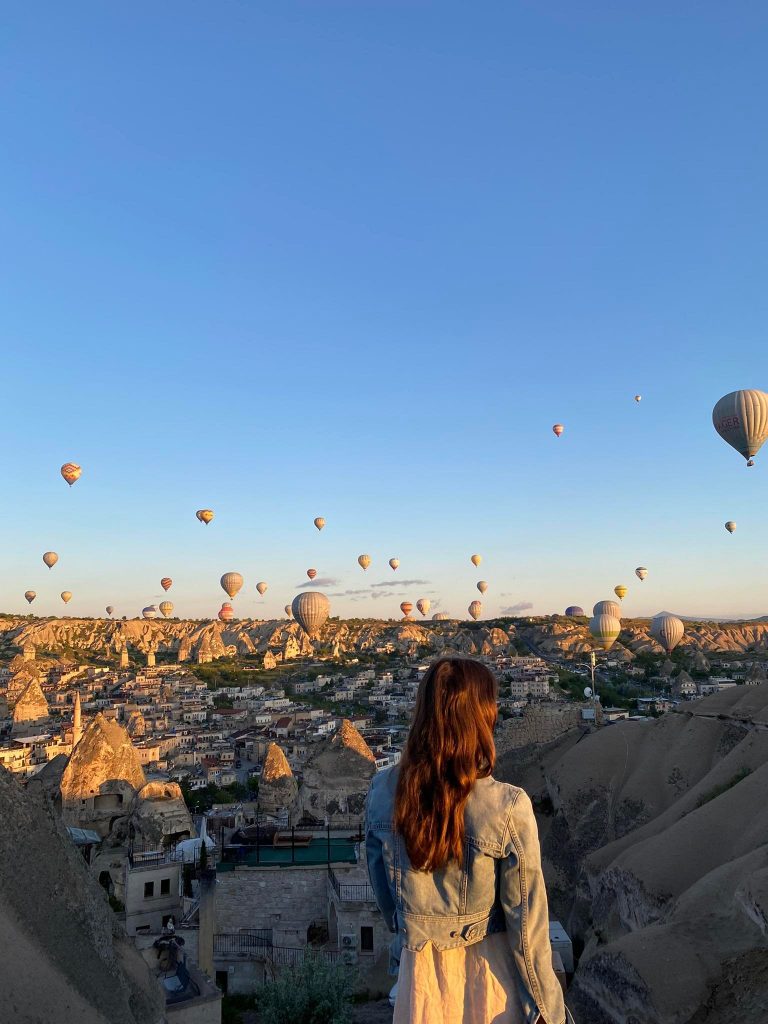 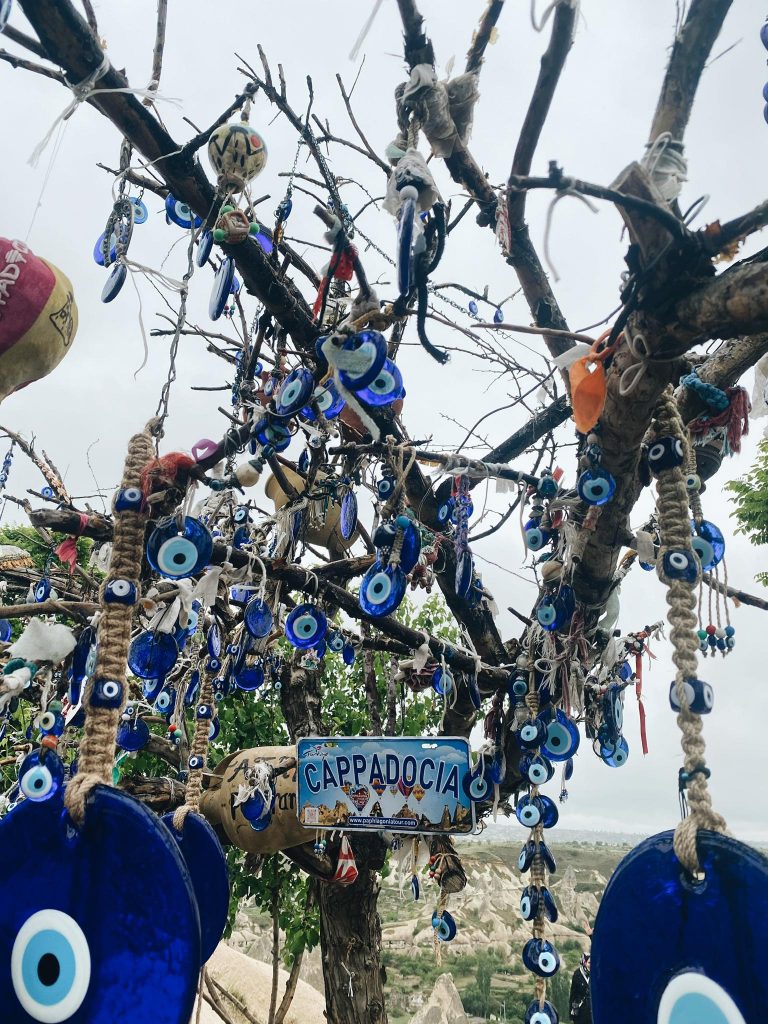 Getting to and around Cappadocia

Easiest and fastest way to get to Cappadocia is with plane. There are two airports you can choose Kayseri and Nevsehir. We flew with Turkish Airlines Skopje-Istanbul-Kayseri. The total flight hours were around 4. We departed from Skopje at 8am and arrived in Kayseri at 2pm. We chose to stay in Göreme, which is an hour drive from Kayseri Airport. There are multiple ways to get from the airport to Göreme or other place, our hotel organized a shuttle transfer from the airport to our hotel. The cheapest way is by getting a shuttle service that will drop you off at your hotel, you can book it online or in person when you arrive.

If you are staying in Göreme best way to get around the town is on foot. However, for most of the sights you will need to either book a tour that will take you there, hire a car or rent a car. We usually rent a car to drive around, but we didn’t want to experiment here and waste time trying to find a parking spot, so we hired a car to drive us around during our stay. Through our hotel we booked Adnan — this is his phone number you can reach him through WhatsApp +90 542 372 57 31

After researching where is the best location to stay while in Cappadocia, I choose Göreme. Cappadocia is known for it’s cave houses and underground cities, which is why a lot of the hotels are built in cave like architecture. I would highly suggest staying in a cave hotel because it’s a whole experience. I stayed at Angel Cave Suites in Göreme and had the most wonderful time. The staff was extremely helpful and friendly, we organized everything through them: car hire, hot air balloon ride, horse riding they even helped us plan our daily tours. The hotel is within minutes from restaurants and shops. The rooms were stunning, if you go I would recommend choosing the deluxe suite (it’s worth it). Also they are pet-friendly.

Around 2 pm we arrived at Kayseri Aiport, we took a shuttle that drove us to our hotel Angel Cave Suites in Göreme, we checked in, settled in our cave room. Relaxed for an hour and decided to go out and explore the town of Göreme. We walked around the small and narrow streets, while wandering around we came across Galerie Ikman a beautiful carpet shop and a popular photo spot amongst influencers. So, I decided that the 10 EUR to take photos is a business expense and took some photos, which turned out amazing and were so worth the 10 EUR. After that we wandered around in search of a spot to have dinner and watch the sun set. We came across Organic House Restaurant which had an amazing location and outdoor sitting and decided to sit down. The ambience was lovely, and the food was average. After a chill dinner we headed back to our hotel since we had a hot air balloon ride booked for the next morning.

Hot air balloons fly out in time for sunrise, depending on the season the departure deffers. We were picked up at 3:30 am from our hotel in a van (the transfers are organized by the hot air balloon company). The procedure is that in order for the balloons to fly the local authorities must give a green flag, meaning that the weather and wind conditions are good. We waited for an hour and were told that due to rain the flight is cancelled, so we were returned to the hotel. We weren’t too stressed since we had 3 more days in Cappadocia. Since the weather was gloomy and rainy we decided that the itinerary for the day would be to visit Kaymakli Underground City and the town of Avanos- famous for pottery. Kaymakli underground city is around 25-30min drive from Göreme, on they way we stopped by to have a panoramic view over Göreme and see the Pigeon Valley.

Kaymakli is one of the many underground cities built in Cappadocia, dating back to 8-7th century B.C. used as a hideout and protection from enemies. To enter the city you need to purchase a ticket, I decided to purchase the Cappadocia Museum Pass, valid for 3 days and covers 14 sights and it was 20 EUR per person. Not only is it cheaper than separately buying the tickets for each sight but you also skip the ticket queue which in some places was pretty long.

Kaymakli has 8 floors underground, but only 4 floors are open to the public, you can hire a tour guide on the entrance that will tell you all about the city, this is useful because there are no information written as you go through. The underground city contains multiple chapels, tunnels, common rooms, storage rooms even an animal barn. It’s unknown for how long people lived there but it is assumed that from a few days to a few months. I was fascinated by the city, considering the fact that it was built in century and how well it was planned.

After the underground city we departed for Avanos, a town known for pottery making. The Cappadocia region is rich in red and white clay and there are dozens of family workshops that do pottery. We visited Òmürlü Ceramics, a family run workshop dating back from 1807. The 7th generation owner gave us a presentation of how pottery is made, even had the chance to try and make pottery, and learned about the process of pottery making. Besides the workshop there is also a shop where you can purchase pottery for home.

After I got back from Avanos, I went to Old Cappadocia for dinner where I tried the local specialty Pottery Kebab, which was delicious.

Woke up at 5 am to watch the sunrise and the balloons fly over Göreme and it was truly magical. We went up to Sunset view point and then watched from the balcony of our hotel. It looked like a scene from a fairytale book. After breakfast I headed to Göreme Open Air Museum which is around 30 minute walk from Göreme, there you can see some peculiar rock formations as well as numerous Christian churches and monasteries  in caves. The two churches that you must not miss are the Dark Church and Elmali Church, one to two hours are enough to go through the museum. On the way back I stopped by to try the dondurma ice-cream which is a Turkish Specialty. For lunch I went to the rooftop restaurant Keyif, that had a great view over Göreme. Had few hours of rest before it was time to go for sunset horse riding in Rose and Red Valley. We got picked up in an old Mustang cabrio and were taken to the stable, where we met our horses and started our 2h trail ride through Rose and Red Valley. The horse riding experience was truly magical, I liked that we were only 4 people so not a huge group. It was so nice to ride through the valleys during sunset, I definitely recommend doing this. Went to bed early since the balloon ride was scheduled for the next day.

Another 3 am wake up call, picked up from the hotel, weather conditions were good and we were off to the take off point. Now a funny story about our second try. We arrived at the take off spot and we were sitting in the van for quiet some time, the other balloons were already getting set up and taking off fast-forward they take us out of the van and show us our balloon that is about to be set up (by this time the sun had already risen). As they set up the balloon there is a huge hole in the material, so they start stitching the hole, by the time they were done we were the only balloon left that had not taken off. When they tried to get the balloon in an upright position, because the pressure within the balloon was not enough the balloon started falling and caught fire from the open flame, which left a big black spot on the material and it burned on a few places. At the end they did manage to get the balloon up, but we decided to not board it since it did not look safe at all. For reference the company is called Universal Balloons.

We had breakfast in the hotel before the car came to pick us up and take us to see the rest of the sights we had planned. First stop was Selima Cathedral which is an hour drive from Göreme, we had a local tour guide there who explained everything about Selima Cathedral which George Lucas wanted to use to film one of the Star Wars Movies but unfortunately was not given the permission by the Turkish government. After Selima Cathedral we headed towards Ihlara Canyon, where we went on a hike through the canyon. The canyon was pretty, there were many churches carven within the canyon. The hike is flat and it takes around one hour to a hour and a half to go from one end to the other. This was a sight that we liked the least, so if you are tight on time I would suggest to skip it. We had lunch at Çinar restaurant by the river where we had some traditional Turkish food and tea. After Ihlara Valley we headed to Zelve Open Air Museum and the Fairy Chimneys. Peculiar rock formations that look like fairies.

Last day, a very stressful morning. It was a very tight schedule since we had our last chance to do the hot air balloon ride, but we also had to make it in time for our 8am flight to Istanbul. We were picked up at 3:30 am from our hotel and were taken to the take off spot, everything was according to plan and third times a charm we had our hot air balloon ride. The experience was truly magical and a bucket list type, you feel like floating. It’s so peaceful and relaxed, watching the sunrise from the balloon was truly spectacular, there were around 200 balloons up in the air it was truly beautiful. The ride took around 1h, the highest we went was 900m, after we landed there was a champagne toast and they gave our diplomas for a successful hot air balloon flight. The company was called Istanbul Balloons. Our driver Adnan was waiting for us with Otto and took us straight to the airport, we made it in time to catch our flight.

Despite being a very stressful and sleep deprived trip, it was beautiful. I think that it is a place worth visiting in your life and that you absolutely should not miss the hot air balloon ride as it makes around 70% of the overall Cappadocia experience. 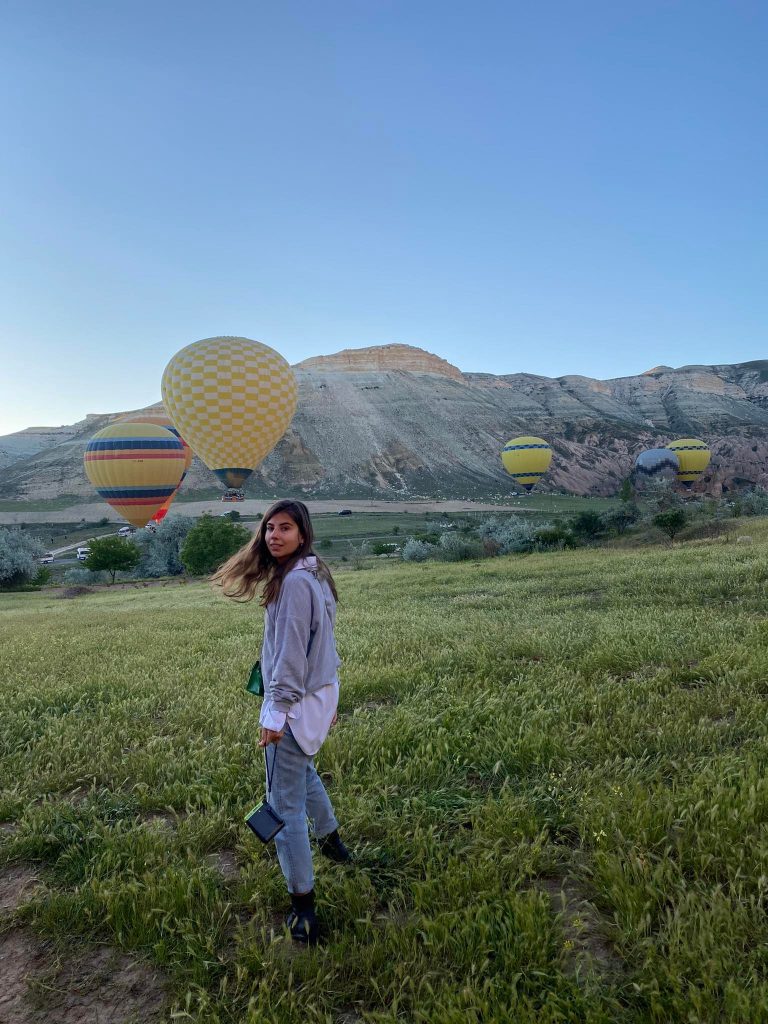 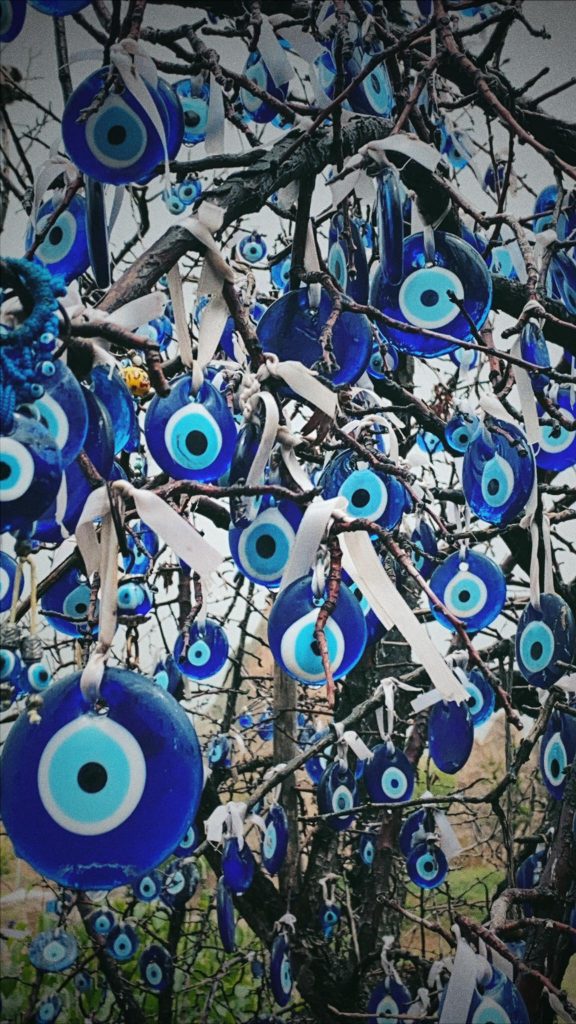 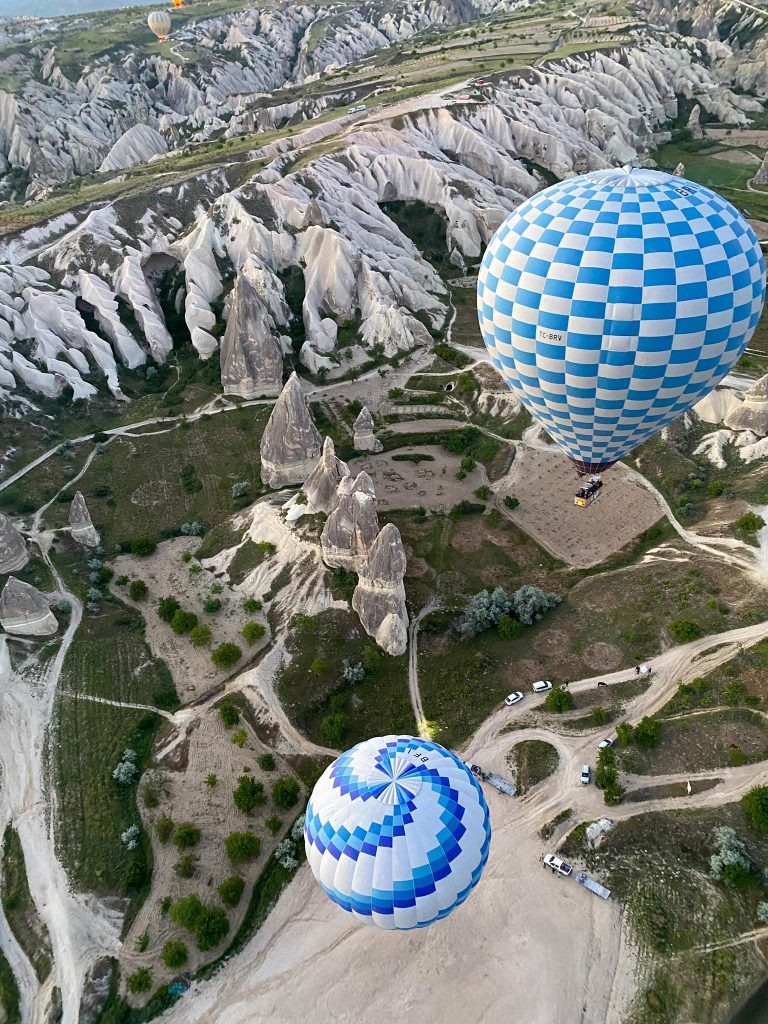