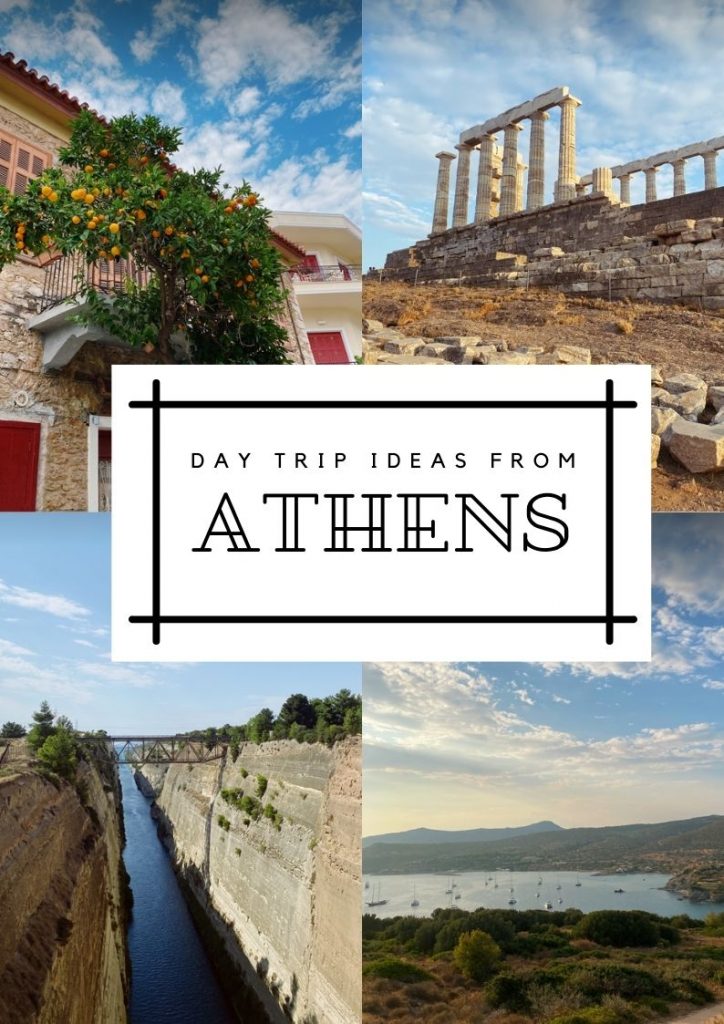 Athens has so much to see and do just within the city (link to my Athens travel guide). But, there are also many sights and attractions that you can visit on day trip from Athens. Most are easily reached either by boat, organized tour, public transport or a short ride. Depending on what you like there are various options for day trips from ancient ruins and museums to beaches and coastal towns to monastery and churches.

I spent 3 days exploring Athens and one whole day going around Athens area and visiting some of the closer sights. The majority of attractions can be passed in a day, but you can definitely do them in multiple day trips if you like a more laid back tempo. 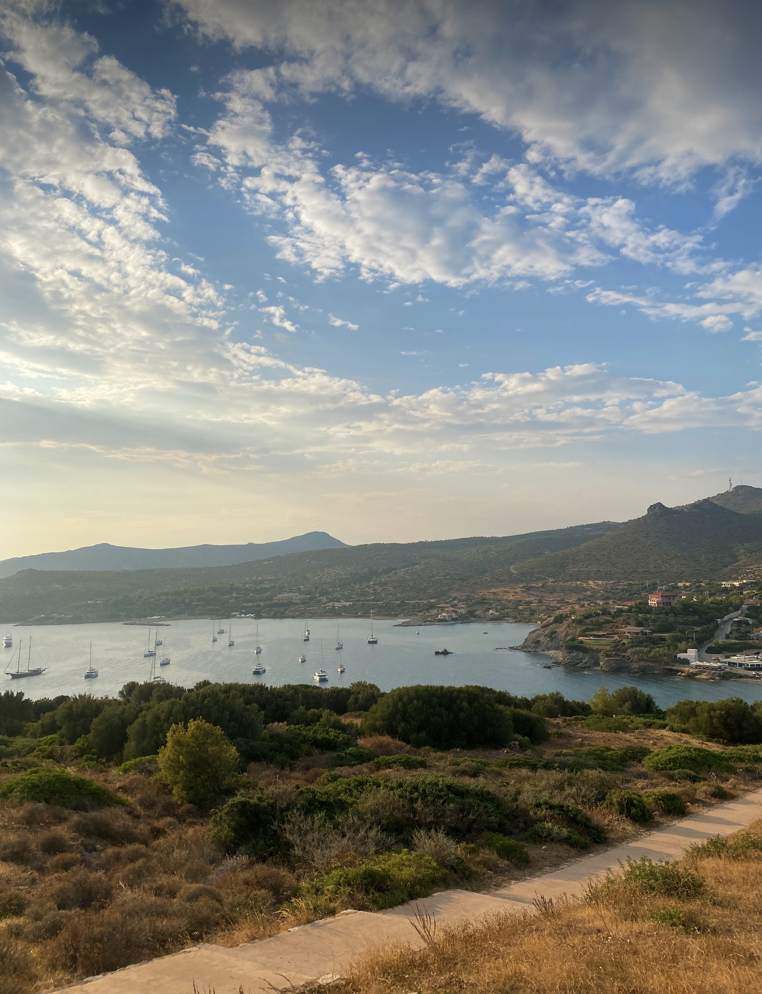 Getting to and around:

Since I wanted to pass multiple sights in one day the easiest and most flexible way was renting a car for the day. Car rental is fairly inexpensive in Athens, we used the company VEGA and had great experience with them. I made the booking few days in advance using their website, the best thing about VEGA is that they have a rental location in the center of Athens so no need to go all the way to the airport. They offer unlimited mileage which is another plus. After picking up the car early morning we departed for our little road trip. 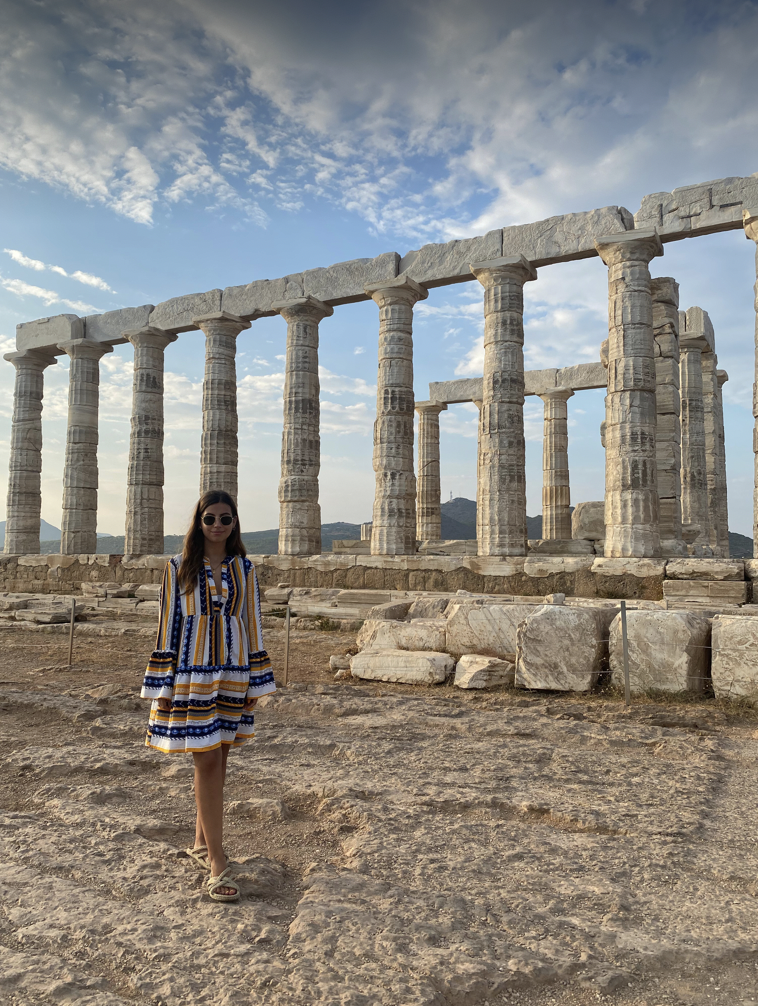 The real-life location of the city of Agamemnon in Greek mythology (often mentioned by Homer), the archaeological ruins of Mycenae are 120 kilometers from Athens. The city dates back to the Bronze Era. The earliest archaeological fragments uncovered here date to the 15th century BC, considered the Prehistoric Era. Visitors can see remains of ancient palaces, fountains, ramparts, and the famous Lion’s Gate and “Tomb of Agamemnon” .

The lovely stretch of Athen’s coastline begins just a few kilometers outside of Athens and extends for approximately 100 kilometers (a two-hour drive) until reaching Cape Soúnion. At Cape Soúnion you can find the impressive ruins from what was once Temple of Poseidon, Doric style temple dating back to the 5th century BC. Visit it during sunset for a magical view.

Located in the Argolic Gulf, this picturesque town is full of old-world romance. Nafplio’s lively Mediterranean ambience is found throughout the town, but especially in its waterfront cafés and atmospheric alleyways. The streets are filled with tavernas, cafes and local shops. The town has a combination of Roman, Byzanthine, Venetian architecture. Fun fact, Nafplio used to be the capital of modern Greece.

The main tourist draw of Epidaurus is the well-preserved Ancient Theater of Epidaurus, which dates from the 4th-century BC. The theater is still used to date where numerous concerts and performances are held each year. During the summer months June, July and August the Athens & Epidaurus Festival is held here. On the archeological sight there is also a museum. The museum displays architectural elements that were discovered at the Sanctuary of Asklepios, as well as pottery, statues, coins, and other objects uncovered at the archaeological site.

Artificial canal built in 1893. This canal connects the Gulf of Corinth with the Ionian sea, separating Peloponnese from the Greek mainland. It’s 6km long and 24m wide, making it impossible for modern transportation boats to pass through. But it is a remarkable photo spot. There is a parking and cafe next to the bridge overlooking the canal where you can park the car and capture a snap of the Corinth Canal.

Meteora is 350km from Athens, but many tourist operators offer it as an organized day trip from Athens. I visited Meteora in July on a separate trip in Greece. However, it’s one of the must visits in Greece. Breathtakingly surreal are the Meteora monasteries located on a dreamy landscape of rocky megaliths in the plains of the Thessaly Valley. The first hermits came to this far-removed corner of Greece at least as early as the 11th century to withdraw from the world and contemplate divinity. Christian Orthodox monks began building monasteries here in the 14th century. Currently only a small group of monks and nuns live and worship at the Metéora monasteries. Most of the activity today at Metéora centers around tourism, as this designated UNESCO World Heritage Site is an extremely popular travel destination. Six of the original monasteries remain and are open to the public. If you would like to enter the monasteries you have to be dressed adequately, no shorts, women should wear long skirts or dresses, no swimsuits, no showing of shoulders. The monasteries close around 4-5pm so make sure you arrive beforehand .

Travel guides for other places in Greece