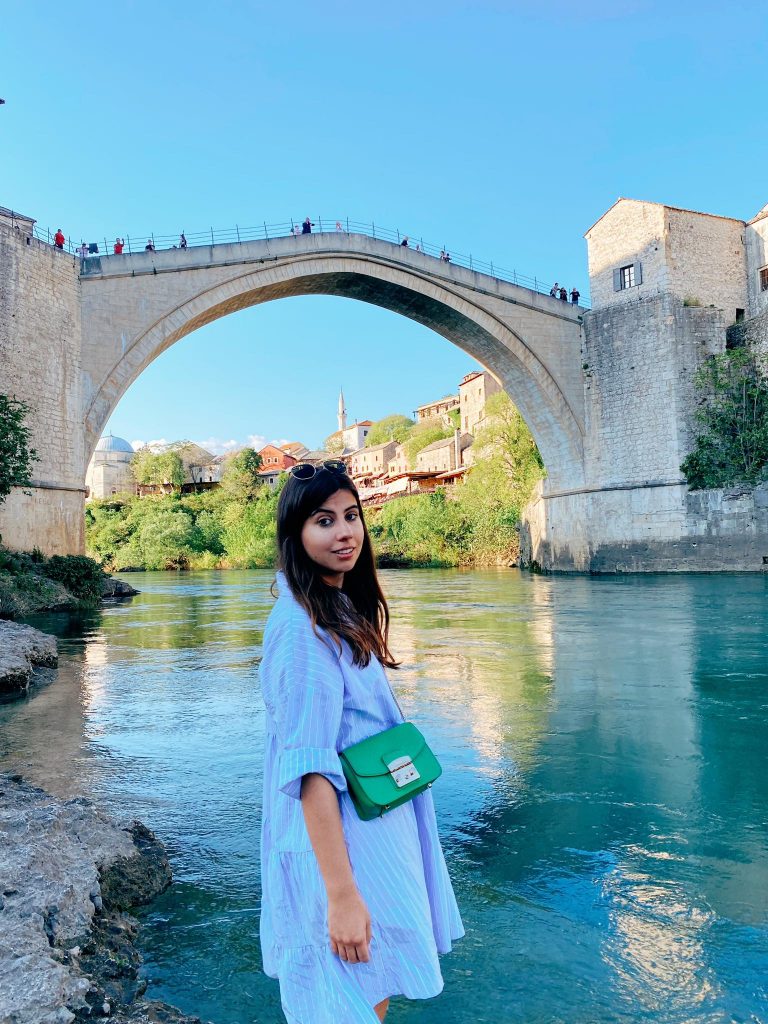 Welcome to Mostar. One of the most visited places in Bosnia & Herzegovina, famous for its beautiful architecture, natural beauty, and the world famous Stari Most.

Up until the 19th century Mostar was under the Ottoman Empire which resulted a large portion of the architecture and culture of Mostar to be greatly influenced by it. The famous Stari Most was built  during the Ottoman Empire ruling. Mostar is a charming city, I immediately fell in love with its cobble streets, stone houses, the beautiful views and cute shops and restaurants. I only stayed in Mostar for a day, but I think it was enough to see the most famous landmarks and experience Mostar. 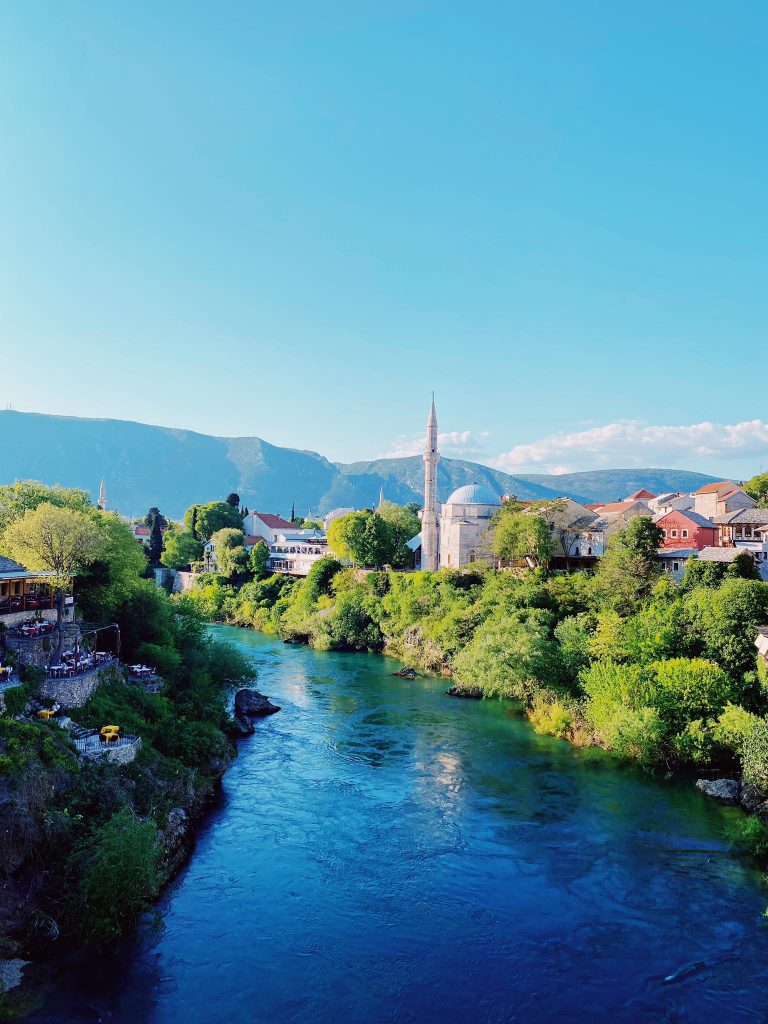 Getting to and around Mostar:

I was doing a Balkan roadtrip with a car, so following the rafting on Canyon Tara we drove to Mostar, approximately a 2 hour drive on small, narrow and full with turns roads (but worth it!). One option is driving from some of the neighboring countries, and the other option is to fly to Sarajevo and then take a car/bus/tour to Mostar, which is also around 2-2:30h drive.

The city center of Mostar is fairly small and all the sights are nearby so you don’t need a car (finding a parking spot is a bit hard too), best way is to walk around.

I didn’t do much research regarding accommodation, so I booked the first that came up on Booking that was pet friendly and had parking- Villa Anri. Located in the Old Town, just few minutes walk from Stari Most, from the rooftop balcony we could see the bridge. The hotel was lovely, spacious rooms, super clean, free parking spot and pet-friendly which is everything we needed. 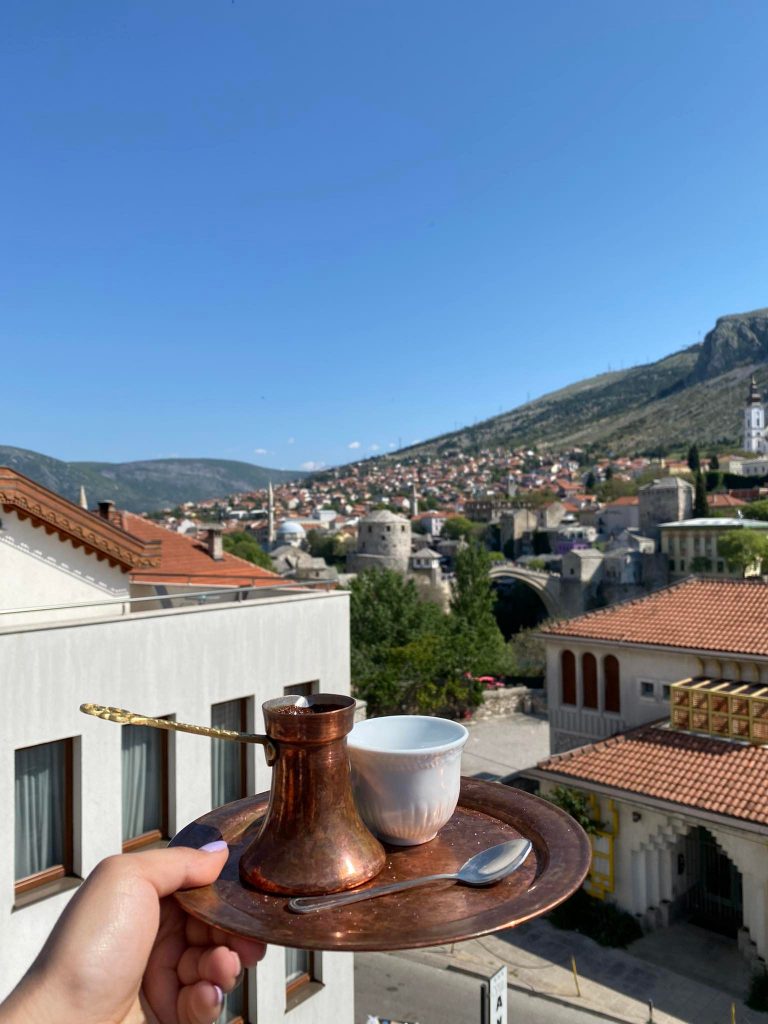 Mostar Old Town- cobble stone streets, connected with narrow streets and bridges, local shops, stone building and filled with restaurants and cafes. The Old Town is super picturesque. Take a stroll through the streets, stop by to get some souvenirs and indulge on some traditonal food and drinks. We had lunch at Resturant Shadrvan and it was suberb!

Stari Most- an UNESCO World Heritage Sight, built  in the 16th century by the Ottomans and is an example of typical Islamic architecture and fine engineering. It crosses over Neretva river, and is at the heart of Mostar’s historic Old Town. During the civil war in the 90’s, the bridge was destroyed. However, after the war it was rebuilt to its exact original specifications. Today, the bridge attracts tourists from all over the world. If you are lucky you might witness a bridge diving done by professionals.

Don’t Forget Stone- located nearby Stari Most, a small graffiti as a reminder of the horrors and autocracies that were happening here not so long ago. Although, Mostar has rebuilt after the war when walking around you can notice many building having bullet holes in the walls.

Čaršija- part of the Old Town is the Čaršija (which means bazaar) of Mostar. Filled with various shops that sell souvenirs, clothes, artwork by local artists and coffee shops that serve Turkish coffee.

Kriva Cuprija- looks like a smaller version of Stari Most,  it’s older than Stari Most and was built as a test before building the Stari Most.

Day trips to take from Mostar:

Kravica Waterfall- around 20 minutes drive from Mostar is Kravica Waterfall.  They are not very popular to tourists but they are absolutely beautiful. Entrance fee is 10 EUR per person and it takes a short walk from the parking lot to reach the waterfalls. The waterfalls are magnificent, there is an option to have a boat ride (electric boats that are charged on solar panels), have lunch or coffee at the bar or simple tan or even take a dip in the waterfall.

Blagaj Monastery- Blagaj is a small village located 15 minutes before Mostar. Famous for the monastery that was founded by Dervish Monks in the 16th century. The monastery is built on a cliff in classic Ottoman architecture. The landscape is beautiful, and there are numerous restaurants around where you can have some food and/or drinks.